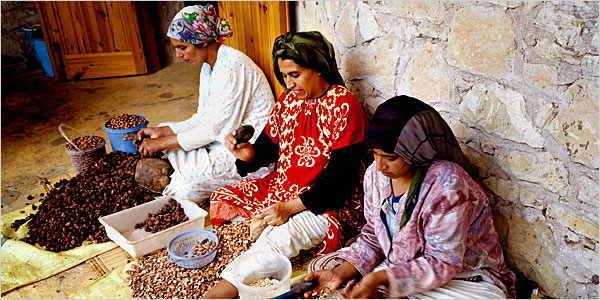 The road from Marrakesh to Essaouira is craggy and bleak, an arid moonscape dotted only by a few roadside towns and the occasional Berber village. In the ’60s and ’70s, Essaouira was a stop on the hash-filled hippie trek — land in Marrakesh, load up your magic bus and head west for the windswept beaches and clear blue waters of this former Portuguese fishing village. Back then, Jimi Hendrix made the pilgrimage, as did Bob Marley and Cat Stevens. Essaouira still has remnants of its boho past: crocheted Rasta beanies are sold alongside fezzes in the souk; surfers come to lap up the waves in what is now one of the world’s top windsurfing and kiteboarding spots; and a dilapidated fort, which legend has it was the inspiration for Hendrix’s “Castles Made of Sand” (he actually recorded the song nearly two years before touching down here), is just south of town.

In recent years, well-heeled Europeans have started to flee the more touristy Marrakesh for Essaouira, where they stay in luxurious riads in the medina and sunbathe on the pristine white beaches. The town has also developed a vibrant cultural life, with galleries, music festivals and souks filled with high-end artisanal crafts. You can pick up everything from carved wooden instruments to inlaid boxes here. The real find, however, is argan oil, made from the nuts of the argan tree, which grows almost exclusively in this region. The oil, which is said to have restorative and age-defying effects, has become one of the latest miracle ingredients in the beauty industry. High in vitamin E and essential fatty acids, it is believed to help all sorts of skin conditions: dry skin, acne, psoriasis, eczema, wrinkles. Moroccans slather it on their skin, hair, nails and even their babies. They eat it, too — drizzling it over salads and couscous, or using it to make amlou, a tahinilike spread of the oil, almonds and honey.

Approaching Essaouira’s sandy-colored ramparts, passing the olive groves and grazing donkeys, you see signs announcing women-run argan cooperatives: Argan Co-Op, Women’s Argan Collective, Miracle Oil. And so on. If you pull over to a cooperative, the Berber women — and it is only women who make argan oil — will often invite you in to watch them work. In most of the cooperatives, the older village women sit in the courtyard and work as the younger bilingual girls walk you around, giving a tutorial about the process. (Pull over too many times, though, and be prepared to hear all about the process again. And again.)

The nuts, which look like a cross between a walnut and an almond, are picked out of the fruit of the squat, gnarled argan trees that dot the yellow hills above Essaouira. Depending on the season, there might be goats up in the branches, munching on the fruit. The nuts destined for salad oil are roasted on an open flame over a large steel drum, like chestnuts, which brings out their distinctive peppery flavor; those that will be used for skin- and hair-care products are left raw.

The women first crack the shells with sharp stones. They then place the kernels between two Flintstone-size slabs of rock, grinding them into a brown paste, which resembles chunky peanut butter. The paste, kneaded by hand to extract the oil, transforms into a solid hunk and is sent to nearby factories, mainly in Agadir, where more oil is extracted by a press. Some is made into soaps, creams and shampoos, but it is the pure oil that is most sought after.

The souks of Essaouira are filled with little jars of argan oil that have suspicious locals rolling their eyes. “Vegetable oil,” they’ll warn you. (Check the bottle for provenance; if it has a cooperative’s name on the label, it’s probably authentic.) The best way to find the real deal is to follow the smell of roasted nuts that will lead you to the cooperatives.

Argan is not so new in Europe: English and French tourists have been bringing it back from Moroccan seaside vacations for years, and it’s all over the markets of Provence, lined up next to the lavender and olive oils. But now, thanks to the substantial efforts of the Moroccan King Mohammed VI (who has been praised for his efforts to promote women’s rights) and the local government, the oil is being exported worldwide, moving from the mud-and-stone co-ops into spas and Sephoras around the world.

Because the extraction of argan oil is a labor-intensive task perfected by the Berber women native to the area (it takes a few days to produce one liter), the government has established a fund for the cooperatives. Outside groups, like the government of Monaco, have gotten involved as backers. Women from the villages nearby are invited to work half days (so they can still tend to their families) in exchange for fair wages and good working conditions. Eventually, the cooperatives should pay for themselves. Unesco has designated the 10,000-square-mile argan-growing region as a biosphere reserve.

Meanwhile, more Western cosmetic companies are starting to distribute this “liquid gold,” as it is often called. Liz Earle, who runs an organic skin-care line in England, uses argan oil that she buys from two of the cooperatives in Essaouira in her Superskin Concentrate. “When I first found argan oil, I brought it back to the U.K. to have it analyzed,” says Earle, who forages the globe for raw ingredients. “It was so remarkably high in vitamin E and had these very interesting phytosterols, which are good for scar tissue and so many other things” — including, she says, that hard-to-define problem of lackluster skin.

But what Earle likes most about the oil is that the production passes the sustainability test and directly benefits the women who make it. “Culturally, what it does is good,” she says. “It provides income to a group that wouldn’t otherwise have it.”

Thank you! 👍 Your message was sent successfully! We will get back to you shortly.